I normally browse the web behind a thick layer of proxy servers and filtering tools that allow me to read web pages without a single ad in sight.

For reasons that don't belong here they were deactivated this morning when, as I was checking my referrers and following back a single hit from the famous Waffle SS fan club, I hit the Brussels Journal's phony "moral equivalence" outrage page. 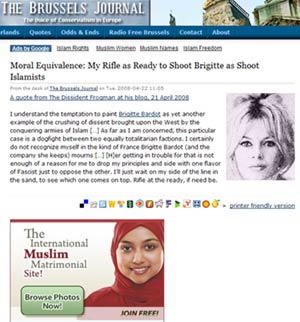 Imagine my surprise—and click for the full screenshot, to imagine it even better. Alone in Brussels? Not anymore: me love you long time, Allah u'ackbar.

Ergo, the big fat ad for Muslima3, the "International Muslim matrimonial site" on a Euro white Nationalist-Supremacist site posturing as a "Conservative" outlet that sees itself as the champion of the thorny issue of unfettered Islamic immigration, so-called "European population replacement4" and the Coming Fall of the West under the Invasion of Muslim Breeding Machines.

And it gets better.

While ignoring that I specifically wrote "Brigitte Bardot should definitely not be prosecuted, no matter how stupid or pertinent her opinions" before laying down my reasons not to side with her like I had—and still would—for people like Oriana Fallaci and Michel Houellebecq, prosecuted in France just like BB, and for similar reasons as far as the free critic of Islam is concerned, the trousered apes5 that comment on the BJ's smear job quickly moved from feigned concerns over Brigitte Bardot's freedom of speech that are as faked as they are irrelevant6, to the usual stock of the rabble of Euro white-priders, Nationalists, Sovereignists and whatnot. Namely:

Mixing Islam with race—much like their alleged "enemies" in the Islamist and Multiculturalist side, ironically enough—cloaked pro-Serbian Nazism, bitter quips at the situation in Iraq taken straight out of Jean-Marie Le Pen's little book of support to Saddam Hussein, confused justification of the former's anti-Semitic remarks on the Holocaust, and crazed laments on the "disappearance of the white race" through a "criminal policy" of "immigration to Europe and the USA" which, they claim, the Evil Yours Truly and "most Jewish organization support"—And I'm quoting, from screenshots of the comments.

The most active moonbat in the fray actually seems to suffer from some sort of psychotic obsession with the impending "disappearance of the white race7", and lays down his rants on "population replacement" just below the Muslima dating ad—isn't it beautiful?—without apparently realizing that regardless of Islamic influx and fecund loins, Europe's population is already replacing itself:

With nothing, if demographic curves are any indication.

If these guys at the Waffle SS fan club are so concerned with the scarcity of their "pure" bloodlines, they should switch off the computer now and go hump Heidi like mad rabbits on a Viagra overdose—though not before a thorough check of Heidi's genome, of course.

But then, that takes more balls (literally) than to hang out at the Brussels Journal with the other skinnerds, daydreaming Salvation Through Genocide.

That said, and knowing the mechanisms of sexual attraction in many species8, it would be amusing to know how many race-conscious readers of the BJ couldn't resist the temptation to check on these hot Islamic cuties and, secretly, clicked the ad to see by themselves the torrid exotic secrets hidden undoubtedly under the hijab ("Browse photos now!"). I mean, imagine the scene:

Gertrude (blond, tall Aryan with huge yet firm and pointy feminine attributes, and a recent refugee from the Caliphate of Amsterdam), steps unexpectedly into her French boyfriend Pierre's Brussels office:

"Hello, vat are you doink on de komputer?"

Pierre (Originally from the French region of Brittany like Jean-Marie, a Celt-Caucasian with a bit of German diluted in for reason of a grandmother unreasonably enamored with men in uniforms), clicking frantically and ultimately shutting off his laptop in a hurry:

"*click* Huh, *click* er, *click* nothing I..., Just checking the Brussels Journal for the, er *click* latest developments in the disappearance of the white race. Dont look! *slam* It's really bad! We're doomed unless we kill 'em all! ... Say, you wouldn't happen to be in the mood for a good hard shag, would you?"

I wonder if Google would release the numbers.

"a grandmother unreasonably enamored with men in uniforms"

Frenchfroggie, being enamored with men in uniforms is never unreasonable.

bonmotdot: Agreed, save for—perhaps—men in Feldgrau uniforms, speaking Germans while they march up and down the Champs Elysées circa 1940.

To every rule there is an exception ;)

Amen bonmotdot. Finding oneself enamored with men in uniforms is never unreasonable especially if they are of the pro-liberty kind and heavily armed. :)

"But then, that takes more balls (literally) than to hang out at the Brussels Journal with the other skinnerds, daydreaming Salvation Through Genocide."

Ha ha! Skinnerds! An apt description of the a-holes at BJ!