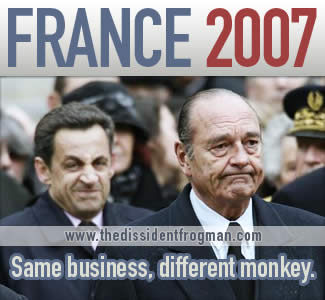 Among the many benefits of Anglo-Saxon "warmongering" in general — and of American "hegemonic military power" in particular — that the French most conveniently and frequently forget, is the fact that for a solid half-century now (in sharp contrast with the one before that), French officials of all branches of the government (particularly the Foreign Affairs one) were able to meet with "ze Germans" without necessarily having to forfeit half of the Motherland to our Teutonic neighbor's Fatherland.

Last in line to benefit from this situation, paid in blood, sweat and cash by the "Anglo-Americans" they so much despise, is our neat and new Foreign Affairs minister, Bernard Kouchner, fearlessly interviewed here by the thereafter pacified sausage side.

Notice first a rather stunning display of naïveté on Hans Bitterman's part:

SPIEGEL: "(…) yet officials in Berlin complain that their friends in Paris are claiming every diplomatic success as their own."

Silly Boche: what else is new? Every success is French, every failure is the European Union's(1). Where the hell have you been for the last 60 years?

SPIEGEL: "Sarkozy baffles the Germans with statements like: "If France doesn't assume the leadership role, who will?"

Well, what can you expect? You lost the war Hans.

Admittedly, France didn't win it either, but it's no reason to get cocky — or do-you-want-we-shall-call the Yanks again for a new Schmeisser-spanking session?

But enough Blockheads-Bashing, let's get down to the nitty-gritty. On Iranian nukejobs and the Sound of Sanctions:

SPIEGEL: "If this doesn't work there could be war. You said it yourself."

Indeed he did, but just you wait, you impetuous Kartoffel:

Kouchner: Wait a minute.(2) What I said was: "War would be the worst possible thing." And that's what I am determined to prevent, through unremitting negotiation.(3)

SPIEGEL: It's nice that you set it straight.

Oh so nice. The Kraut's relief is palpable here, and for a reason: this sounds much like the song one could hear from Paris in the days before the Great Leap Towards Sarkozy. Remember when Jacques Chirac and his powdered monkey, the vile de Villepin, were leading the Saddam Task Force Europe, and then Foreign Affairs villain would serenade his domestic audience like so:

War is always the worst solution. (...) We're ruling out no option, but obviously want to take as far as possible any peaceful course of action which works before - should we reach an impasse - considering other options.

That was de Villepin on Iraq 2003, this is Kouchner on Iran 2007. Somebody with much time to lose please try to spot a difference in either the style or the substance; because I am feeling a bit dizzy.

Must be all that déjà vu.

"I knew I was right in urging people to restrain their enthusiasm for the 'new' French"-Banjo
Banjo: I think we need to give the Frogman a little more time! Rome wasn't built in a day, you know!

I hate this type of comment method. (where you can't go back and see the previous comments) My memory sucks so I have to either try and remember what others say or just wing it.

I think I will wing it.

I'm waiting for DF to educate me, after all he lives there is French, and might know a sh1tpot more than the rest of us. I don't know or have known him long enough to know if he does that type thing or if he only does it by email. Well, he has mine, I'm always open to education, cause you see, my education didn't include any "101"s except in the hard knocks of life course.

I also know I worked for almost 30 years for the same company,(and also for a few others, plus three years in the U.S. Army, have made a good living, and raised two kids, then retired, and am still helping raise five grandkids. And doing a damn good job of it on a very limited income. I have no bitches for myself.

So...France will come to the rescue? Is that before or after the coming revolution? Or is there not to be one because the "old" French didn't show up or couldn't get passes out of their rest homes?

Excuse me if I am not sure France could tell Germany anything of merit. Germans are hardheaded, nationalist, and a few other things that I won't mention. None them include cooperative, nor putting their asses on the line for anybody else, especially America and France.

All of this is from my limited education (no universitys) no liberals, nor "progressives", nor even anyone more educated than your average joe Veteran that comprise most of my buds.

I still want to know what the EU or the New European Countries have to offer the American Republic in the new "long war". Or are we going to have to rescue them again from the commies or the islamics?

Oh well, I guess it's really none of my business as I only have a bunch of grandkids at stake and shouldn't worry about the state of the world or if America is going to get any help in the biggest fight for survival that the world has ever known.

Forgive me if I have forgotten anything, or missed anybodys comments. But I ask no forgiveness for hurting anyone's feelings. If you can't bring your sh1t to the table and cuss and discuss it, go home.

I guess most European nations, France, Germany, Spain, Italy, etc., (with the honorable exception of Britain and a few others), have played a very unfair game to NATO and the United States and Britain. On the one hand, they enjoy the benefits of belonging to the most powerful military alliance on earth, on the other hand they can get away with denying their support when they are called upon, even their strategic vote at the security council at the UN, and they also get away with sometimes supporting and sometimes just change their mind just because a new political party got to power (like Zapatero when he pulled out the spanish troops from Iraq). May be the Europeans are simply spoiled, and then they want the world to take them seriously. By the way, thanks to Dissident Frog for this great blog.

If it was just a matter of the various continental EU "old europe" nations being spoiled, spineless, and generally useless, then it wouldn't be so bad.

But, what we have is supposed allies that actually go the extra mile and offer constant and direct aid to whom ever we happen to be having to fight.

Austria provided 1000 of their .50 cal sniper rifles to Iran. Many of those rifles have been distributed to murder/death cultists in Iraq and are used to kill US and Coalition servicemen. The Austrian gov likes to pretend shock and concern about that as they twitter and giggle behind their hands.

Switzerland refused to honor an agreement to provide a 100 or so armored personnel carriers (M113) to the newly forming Iraqi Police Force because that would be seen as "assisting the US in their illegal and immoral war".

Those are just two examples. By all tradition, custom and rights, both those nations cities should be reduced to burning ash. You side with the enemy, you are enemy. Enemy is enemy. All equal under the gun.

It's fun to line up for a turn to kick the US in the nuts. Its the national sport of most EU nations.

Grim, you forgot to mention the Germans sending their people over and then refusing to put them near the fight. I don't know if it's still the case but I know that it was the case late last year and early this year.

By mistake I rated this post with 2 stars. I must have been 5, as I really enjoyed it.