June 6th, 2009: the current Resident of the United Sates, (Barack) Hussein (Obama) is in France playing tit for tat with the current Monkey (in a) Suit Monarch of France, Nicolas "Windbag" Sarkozy, and possibly commemorating D-Day at some point, at least as time and Michelle's Paris shopping list permit.

Oh, and the big topic of discussion for this official ROTUS1 visit is apparently "Who Managed To Insult The Queen of England This Time? ('T'was you wot done it')".

In other news, perhaps more related to the bloody yet glorious events of the 6th of June 1944 and the days after that, the French government has decided against all evidences to award the Légion d'Honneur (Legion of Honor, one of the highest distinctions in the French arsenal) to a phony D-Day Hero.

Now, when it comes to the landing in Normandy, it's not as if there was a shortage of genuine heroes, both dead and alive (the Légion d'Honneur can, of course, be awarded posthumously) so I rather suspect the French had to go out of their way to really find that one fake paratrooper.

Apparently, his biggest feat is that he chose to retire in France2. Jules Crittenden has all the dirty details:

Lowell, Mass., native/Derry, N.H., cop Howard Manoian retired to Ste. Mere-Eglise in 1985, where he is revered by the locals and has long earned free drinks, regaling tourists and reporters with tales of jumping into bitter combat with the 82nd Airborne...

The sad part is, he actually deserves honors … for coming ashore at Utah Beach on D-Day in the 33rd Chemical Decon Co., serving in a supply dump, and being injured and wounded several times in the service of his nation … just not with any glamorous leaps into darkness or desperate house-clearing ops.

Go read that, and on second thought, scratch "perhaps more related to the bloody yet glorious events of the 6th of June 1944" but ultimately don't be too upset with that latest Gallic infamy: the French bestow that legion of honor to just about any schmuck, from soccer players to third rate pop/rock singers. It's not as if it was worth anything anyway.

This 65th anniversary of D-Day is sadly shaping into a pathetic masquerade organized by a debased bunch of politicians who, be they Brown, Sarkozy or Wossname Obama, couldn't muster enough genuine respect, admiration and gratitude for the multitude that landed under fire on the beaches of Normandy—let alone the same fortitude and courage—even if their lives depended on it.

So rather than going on with the tribulations of these twats, I propose a couple of documents from my personal collection, published at a time when the French still had at least a bit of consideration for their liberators—and for some, even genuine gratitude—as the events were still fresh enough in their minds:

The 3rd part of a series of cheap "souvenir" leaflets, published in 1947, collecting Allied photos of D-Day: 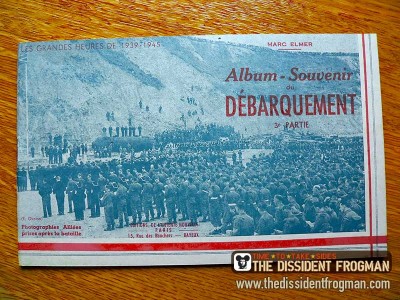 Cover (click all these pictures for the larger version) 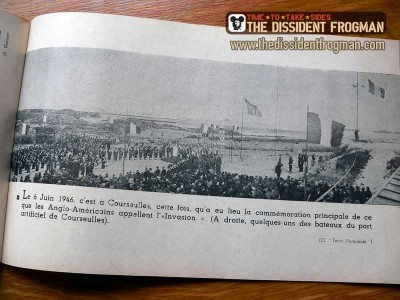 The 1946 commemoration of the landing in Normandy. The text reads: "On June 6th, 1946, it's in Courseulles this time that takes place the main commemoration of what the Anglo-Americans call "The Invasion". (To the right, some of the ships of Courseulles' artificial harbor)." 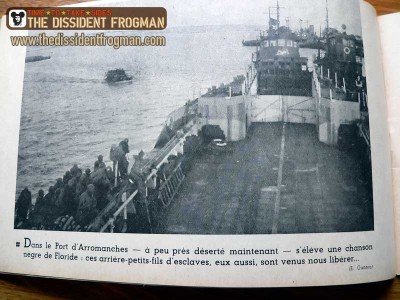 Odly enough, the leaflet opens with this picture, accompanied with the following, err, specific comment: "In the harbor of Arromanches mostly deserted by now a Florida nigger song is heard: these great grandsons of slaves, came as well to liberate us..."

That's a literal translation: the author writing in a France that what was still the center of a colonial empire, did use the French word for "nigger", and not "negro" (that does exist in French too). Here's the catch: in French, the disrespectful epithet is négro (negro), and not nègre (nigger).

Still, in contemporary France, this man would be lead at a Gendarme's gunpoint straight to the closest Sensitivity Training Station.

Next, on a lighter3 note and maybe for the benefit of those modern illiterate Frenchies who deplore the time when mine was a bilingual blog where they could fault the "Anglo-Americans" for not speaking anything else than English4, a 1944 "practical language" manual: Parlez l'Américain en 10 minutes ("Speak American in 10 minutes"), yours for the ridiculous price of 10 (1944) Francs.

This is amusing on several levels. First the editor cared to provide his readers with a sort of phony phonetic version of each English word and sentence. It's the avec prononciation indiquée mention on the cover, which means roughly, and quite ambitiously, "including pronunciation". Sort of a "So it is written, so it shall be spoken" technique. Goes like this:

The idea is that the French learner in this 10 minutes American crash course would pronounce the "word" between parenthesis, and would instantly sound exactly like Steve Martin as Inspector Clouseau in the Pink Panther.

And I do mean exactly.

The other funny thing is that this condensed 10-Minutes-American manual, though short as it is, is crippled with various grammar and vocabulary errors. Take the casual conversation section for instance:

Merci beaucoup translates usually as Thank you very much. At least that's what I was taught. Considering that my first teacher of basic English was a gorgeous, classy Tippi Hedren look-alike whom I still remember fondly nearly 30 years later, trust me: I was paying attention.

Hey, don't ask me. I suppose the scholar behind that entry figured that if the English could also be called the British, then surely the same rule would apply to Les Américans.

Voulez-vous une cigarette ? = Have you a cigarette? (Hève you e saïgarètt)

Ouch. Voulez-vous une cigarette translates in fact as Would you like a cigarette. Imagine the number of G.I.s confronted with these legions of unaware Gallic beggars, and ask yourself: is that enough to explain Europe's reputation as parasites and freeloaders with respect to Uncle Sam's largesse from WWII on?

Yeah, maybe not. But things like that surely didn't help.

The "current Resident of the United States" Heh. Rub it in, why don't cha?

We could let you have him! Cheap!

I speak fluent Americanish, and for those that don't and attempt to impose their gibberish on me there is a button. The "delete" button.

Ya know, Proof, us spending time interacting with rational, intelligent people cuts into the time we can be kicking sanni, dinothefakehomo, woofie, buzzed, and boob in the teeth.

Our hearts and minds are in Normandy today. We might as well join the Frogman for some intelligent conversation!

This may be apocryphal, but my grandfather told me once that they had been instructed that French civilians would point you toward Axis forces if you asked them, "Who ate Lay's almonds?" (i.e. "Où est les allemans," which is bad grammar in addition to bad pronunciation. But I wouldn't doubt it would work.)

Teeg: that's interesting, I didn't know that. To the untrained French ear, this would definitely sound as (as you noted) bad French for "Where are the Germans?", but as a way to give any soldier a simple tool to get such crucial intelligence, that's clever.

Cigarettes and chocolate were another low tech targeting system that was amazingly effective!

And don't forget Spam! For people who had been living on a tiny meat ration for years Spam was like mana from heaven. Its arrival usually brought forth a plethora of useful information with no language barrier evidenced.

I usually don't go for philosophy but this philosophy is the kind that consumes 44 times itself in excess feelings. Another words it destroys more philosophy than it creates.

A little something called logistics. This is a neat slice from the page.
They deal only in facts, but must work for men who merchant in theories. They emerge during war because war is very much a fact. They disappear in peace because peace is mostly theory.
Unknown Author

Bon! Maintenant en anglais, car je connais l'anglais mieux... I'm very pleased reading your blog, so I included ''the dissident frogman '' in the list of foreign blogs in mine. Keep in touch.

P.S. I received the mail for member registration, I will activate it later. Thanks.