Yeah, I know, but thank to the largely urbanized environmentalist lobby who would rather see bears “protected” (therefore creating a structural shortage in the numbers of these animals) than managed by the hunters (who, having a vested interest in them, would work to obtain a sustainable(1) population of plantigrades, as we already do successfully with other species) we don’t have much bears in France, so I had to adapt.

I’m pretty sure boars shit in the woods too anyway, as this is one of the signs we hunters look for, when we set our minds on adding the elusive hog’s meat on the menu.

Which, somehow, brings me to the next point: can you imagine that between tending to various relatives — I have now rushed and abandoned both my progenitors to the disgraceful (because socialized) care of French public hospitals (“free” care is pretty much all one can afford when one is being robbed and forced to a health care system based on state-scam “redistribution” so en vogue in this last of the genuinely Marxist inspired country. Oh and of course, it’s not free either.) — and dealing with the sudden and unexpected fatal failure of various appliances and contraptions (fridge, car, washing machine, car(2), favorite rocket launcher(3)) while trying to earn a living and yet staunchly refusing to be on the payroll of the Government, in a country where being a state bureaucrat is considered a supreme achievement, I nearly forgot I had a blog(4).

Pile enough shit on a man’s head, and you’ll turn him into a bear(5). Who will, therefore head to the woods, possibly grumbling “F* all that, I’m out of here”.

Which is exactly what I’ve been doing lately, more often than not.

I shall apologize to my most honored readership for going AWOL. Yeah, very much.

The frogman shall rise early… 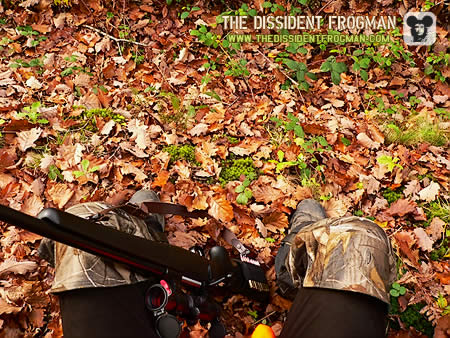 In the woods, he shall stalk patiently… 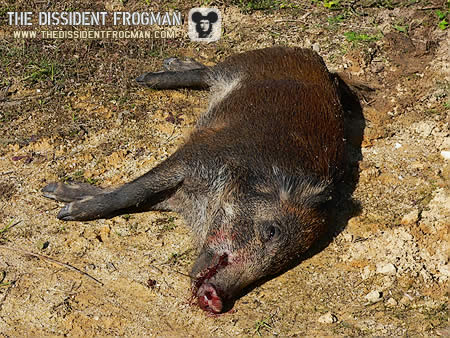 Then strike swiftly and put piggy to rest neatly.

Hunting. Nothing like it when it comes to communing with Gaia(6).

To make it all even worse, every time I’ve briefly emerged from the bushes and back to civilization lately, I’ve stumbled upon some particularly infuriating news, foreign and, evidently, domestic.

The deceptive Sarkozy is playing the American public for fools, much in the same way he did with his French audience. While he’s singing the siren song over the Atlantic, including great media stunts, much in the tradition of his mentor Chirac, he’s having a beautiful romance with Al Gore and the cream of the Marxist work unions and “environmental” NGO’s, siding without restrain alongside these post-Kyoto Luddites(7) at home. And that’s not mentioning the way he’s managing to shove the EU Constitution We The People previously refused up our backside, without asking this time. “F* all that, I’m out of here” says the bear.

And without any relation with the previous paragraph, here’s a cool picture of a pack of hunting dogs. 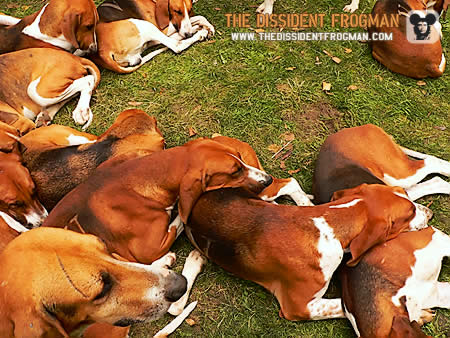 Just because I can, and because dogs have much higher moralities and are far more trustworthy than any French politician, Sarkozy included.

Glad you're, more or less, ok.

Hang tough. Prayers and good thoughts for you and your family.

About that Sharkcosy. Yeah, not all of us are fooled. 1. He's a politician. Doesn't matter where he's from, he's a politician and therefore naturally crooked and bent. 2. Much like here, it's the life long beaurocrates that actually run everything. A politician could be as upright and straightforward as a rock hard saint and the machine of state will just grind along on its usual path, because that's what the machine of state does.

Welcome back Frogman, glad to see you up and running again.

We are not too worried about Sarkozy....he is busy confusing the monkeys we have in our Congress with big words referencing our "worldly influence". Blah, Blah, Blah....we were glad to help out 60 years ago, but let's get on with today's issues (and besides...anybody who studies history will acknowledge that the French helped the Colonists with a little skirmish against the British around 1776 or so. The way I see it...we owed you guys).

Anyway, keep up the good work...and just as an aside....that sunrise is worth rising early for...wow, what a nice shot!

(2) I'd love to model the whole shoe collection for you.

The photo of your trophy is most excellent - may I ask how big was that piggy in the photo? (sung to the tune of "How Much is That Doggy In the Window?"). I just know you're going to have some wonderful meals from that chubby fella - wish I could taste one of the many dishes you'll be cooking up!

I have two things to say:

Nice swine, Froggy!! Glad to hear you back on this freq, was becoming concerned you had fallen prey to some "disaffected" Muslim youths, or some sweet young lovely. Or perhaps, upon recieving pics of my boomsticks, you had decided to get thee to a Nunnery, forthwith!

I have done a bit of small game hunting, a few squirrels so far. Bear season opens on the 19th and we are preping in anticipation.

Hope your mechanical problems are on the mend, and let your parents know we are praying for them.

I dunno. Sarkozy might be your standard Corrupt Gallic Politico, but he does say things over here that oddly few of our Corrupt Yankee Politicos seem to have either forgotten or lost the balls to say. Yeah, he may walk the walk of a Marxist; but he's as quotable as a trustworthy friend, which is one improvement over his predecessor.

Oof. Wow, was that a disassembled sentence... What I meant to say in the middle there was, "he does say things over here that oddly few of our Corrupt Yankee Politicos seem to understand, having either forgotten or lost the balls to say it."

Now you have to make some nice smoked pork tenderloin!