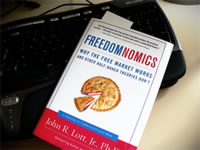 I've just begun reading John R. Lott's Freedomnomics, and even though I'm not far enough in the book to pretend reviewing it, I'm enjoying a lot the no-nonsense, to-the-point tone and real life case studies — just for that, I would already urge you to read it.

Xrlq at Damnum absque injuria has finished his reading, and has a review, even though:

"I'm conflicted as to whether the reply was necessary, given that Freakonomics itself is more of a puff book than a serious economics treatise. That said, enough people apparently do take Freakonomics's conclusions seriously enough to make a convincing rebuttal necessary"

No argument here, and even though I wouldn't bother to read Freakonomics (have more than enough Marxist-Leninoid literature, press and governmental applications and programs in my mother tongue without adding English speaking Idiotnomics on top, thank you very much) I'll enjoy the reply.

Incidentally, I ordered this book from a shop in Florida, it travelled to France through New Zealand and I received it in just a few days. The total was much cheaper than what I would have paid if I'd bought it here.

Even before opening the book, I had a firsthand experience of "Why the free market works and other half-baked theories don't".

Lott also wrote a few books on the right to bear arms. Considering what I've seen of Freedomnomics, I bet you there's a bookshop in Florida that has a bit of a profit coming up, alongside a couple of shipping orders to the Old World.

You don't need to theorize the superiority of Capitalism, you just live it.

This is on my list, though in all honesty I have been re-reading the collected combat histories written by SLA Marshall compiled during ‘64 thru ‘69 in VietNam. The parallels between the startegic thinking of NVA and Minh government and the strategies of Islamofacist terror groups are clear. A passage,

“We have two Vietcong holidays coming up within the week,” Norton(General Jack Norton)said,“and so we figure that is why we might catch them coming on.”

“But is that the way their minds work?“I (Marshall)asked. “Do they give a damn about their holidays? I suggest their target is not the body of your soldiers but the emotions of the American masses. They will do everything they can to spoil the Christmas season for our people and toward deepening their resentment of the war. If that reasoning is correct, then the hour just before the Christmas Truce begins is the time of main danger.”

Norton pondered, then said,“It could be so.”

This from December, 1966. History clearly shows Marshall’s line of reasoning was absolutely dead on. And the ongoing actions of Al Queda and other terror organisations clearly shows they have learned those lessons, while the West has not.

Sorry to rant! I been awake several hours this AM reading and it tends to anger me. Wifey has read Freakonomics, I skimmed through it. As you say, I have already gone over Marxist dialectic many years ago. A “new” writting of it holds no interest for me.

2hotel9: never, EVER say sorry for ranting in such way. This should be a blog entry in its own right, rather than ‘just’ a comment.

As far as my re-readings go, I have Victor Davis Hanson’s Carnage and Culture “playing” in loop. As you say, we in the West have much to learn from our past battles, and that book is simply the best  way to do it.

Frogman, love you, love your blog.

Speaking of Economics… I couldn’t pass up this opportunity to share this interesting piece written in the 19th century regarding the French Revolution and what happened (although I think everyone already knows) when they tried to regulate their economy and manipulate currency values. THis should be required reading..

FIAT MONEY INFLATION IN FRANCE How It Came, What It Brought, and How It Ended by Andrew Dickson White, LL.D., Ph.D., D.C.L. Late President and Professor of History at Cornell University; Sometime United States Minister to Russia and Ambassador to Germany; Author of “A History of the Warfare of Science with Theology,” etc.

I just ordered Lott’s book for Wifey. I will likely do a readerblog post on the blindness of western society to history at sayanythingblog in the near future. I could do one here, also if you like. For the moment I am getting ready to drive to DC and pick up my son. He has been visiting family for a couple of weeks. I’ll be back in my perimeter sometime tomorrow afternoon.

May I ask where the bookshop is in Florida? Is the book published by Pineapple Press? They do a lot of good stuff here in my home state :)