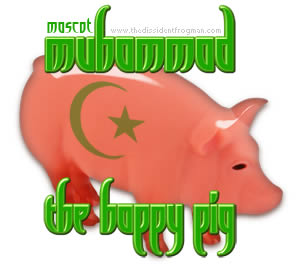 I can only laud the decision of the wise Sudanese court of Justice & Flogging For All, upholding respect for the Islamic faith in the face of smug British teachers:

KHARTOUM, Sudan — Sudan on Wednesday charged a British teacher with insulting religion and inciting hatred, a crime punishable by up to 40 lashes, six months in prison or a fine, after she named a class teddy bear "Muhammad."

But a teddy bear is the worst possible choice, whenever one needs to name a mascot Muhammad.

Now, if only I could get someone at Toys 'r Us interested, I'm sure this could make a killing this season.

WTF Froggy. Yooots with rifles hunting the po-lice? How come they are not VERY DEAD RIGHT NOW??

PARIS - "It felt like they were out to kill us. We knew there were weapons in the suburbs, but never turned against us like that," one of the police officers shot during youth riots near Paris told AFP Wednesday.

Sent to the suburb of Villiers le Bel to quell an outbreak of violence that followed the death of two teens in a crash with police, Francois, who asked not to be fully identified, found himself under siege.

"We were attacked from all sides" by youths armed with hunting rifles."

"The kids were shooting at us at close range, loading and reloading their weapons. I've never seen anything like it. It was like in a movie. They were picking us off from 10 or 15 metres away."

"I was hit in the hand with what I thought was a slingshot. I didn't realise right away that it was buckshot, until I saw the hole in my trousers. I tried to protect my younger colleagues, then I fell to the ground."

Police unions say the scale and intensity of the violence unleashed since Sunday is worse than the 2005 riots, also sparked by the deaths of two youths.

A line was crossed, they say, when suburb gangs turned guns on the police, 120 of whom were injured, several by gunwound. The hunting rifles used by the gangs are dangerous anywhere within a 300-metre (yard) range.

Love that little piggy! Appropriately named, I think, too.

I was disgusted when I read about it in the news, too. Another suggestion for a mascot...a sidewinder. Coincidentally, a similar situation has been happening the past couple weeks in the metropolitan area of Florida where I live. One of our retired Jaguar Football Players, Tony Boselli - one of the most caring, selfless human beings on the face of the earth,has been on the receiving end of ungrateful, mean-spirited, petty, senseless, etc. accusations from a few nuts that he definitely didn't deserve. On the contrary he went out of his way trying to help THE NEEDY CHILDREN of these very people in the community (for the large part with his own money). Last night, thankfully, 99% of the metro area stood up for him - this time the good guy won.

I don't have much hope the Sudan govt incident will come out as well, but miracles do happen.

I see that she got off with "only" 15 days in jail but that people are protesting in the streets for her death. Truly a peaceful religion. Now excuse me while I go outside and feed Muhammad some slops.