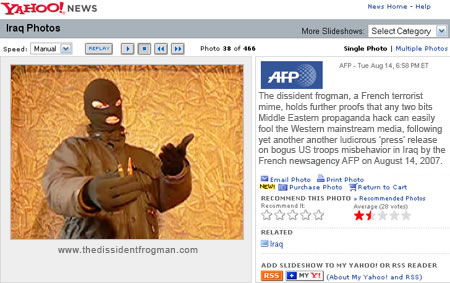 It's a "give and ye shall receive" moment.

I act like a silly fool, to ridicule a bunch of serious fools, and you get a kick out of it. In return, I get a kick out of your comments, both on this blog and on the big wide web (in particular, I see it's making the rounds [no shooty pun] on military, outdoor and gun owners' forums).

"Whoever he is, the Dissident Frogman is a cultural- perhaps genetic- anomaly."

Whoever he is, Bacon Guy means that as a compliment. I think.

"I gotta learn me how to catch the ejected round. Coolest thing I've seen today."

Easy. In this - as in many other things in fact - I follow the great Thomas Jefferson's advice: "Let your gun therefore be the constant companion of your walks." Live with the rifle (before you could even pretend to live by it), handle it and practice until it feels as comfortable in your hands as any other tool (And don't mind the uneasy looks from your relatives)

"You know, I gotta like a dude that put an Aimpoint on what looks like an 8mm Remington Mag… Talk about up-close and personal shooting…"

It's a cultural thing, the result of the way we hunt feral pigs in my neck of the woods: very fast and up-close action. Sometimes really, really fast and really, really close, as in "2cm to the left and you had the boar's tusk up your femoral artery" close.

"You know…some of the coolest people I've met have been Frenchies who headed west and became Americans. (…) What is the saying about the converts being the more Catholic than the Pope?"

Ah! I'm not even American yet but I'd eat Popes with both hands tied just to become one, you know.

"I'd like that gun (and that gunner) for home defence here in Winnipeg. Doubt I could bring it in legally, however. Canada is fussy about guns in the hands of the non-criminal classes."

"Seriously, this guy needs to be shown on Fox just to mock the rest."

Rupert Murdoch if you read this, drop me an email.

"He, ummm, how you say, performs an elegant melody of post-modern movement to an eclectic beat of a different drummer, with a hint of abstract assembliage with his artistic tools, whilst le-education of AFP-Agence Frances Presse is dished out with an aromatic blend of french saucy satire and monty python hyjinx, in a Marcel Marceau kinda way..."

"My only regret is that that HISTORIC bit of video is Flash Player & not an mpeg or wmp. I would download aplenty."

Since you're not the only one to deplore that, you'll be happy to know that I'm working to fix that. Stay tuned.

And my favorite so far:

"I bet the French government is wetting themselves now that it's confirmed there's a mime running around the country with a boomstick and a box of cartridges."

Picture the worried faces at the Quai d'Orsay? I do.

Anyway, the feedback is globally really good, so it means two things:

- I'm working out a slightly augmented version to upload to YouTube, and let this baby go viral - if that's his destiny. No extra stunt, just a couple of screens to make it clear what the video is about. The context, and the original AFP 'news' is explained in the blog post, but once the clip go and lives a life of his own on YouTube, the context is lost - as well as the feedback as far as I'm concerned, one of the reasons why I'm not too big on YouTube and such, but that's another story.

- It's very — very — low-tech. I don't even have a DV cam, and I shot this with the motion video capture of my Panasonic DMC-FZ20. I add to that a weird portable lightning device (see photo below) survivor of the analogical ages of 16 mm moviemaking, that I bought years ago on a garage sale for a few peanuts, without really knowing if I would ever use it. I just thought it was a funny looking thing. It proved useful in the end, since in video as in photography, good lightning can make a world of a difference.

I'm quite certain that Bin Laden's zombie, over there in his cave has a better equipment for his biannual "Keep faith oh my brothers for America will soon be destroyed" broadcasts.

The balaclava I bought on Ebay for a handful of euros. Acting like a clown comes naturally, to the lasting grief of my dear Mother who long hoped I would become a lawyer or a teacher. You know how Mothers are.

So it's cheap, and fun to do. I'd say you can expect more.

And to think that I viscerally hate mimes… 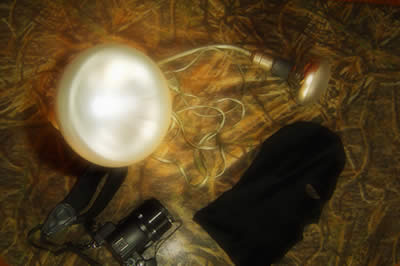 You’ve got to turn this character you’ve created into a regular thing.  If you could come up with a series of clips with this character “miming” criticisms of various topical issues, it could really catch on.  The dress, the mannerism, the subject matter - it’s hilarious!

And there it is. You and folk like yourself are why society and civilization hasn’t collapsed yet. Parents taking the time to make sure their kids have a clue.

Well, let’s keep our heads cool people, we’re not headed for the Oscar ceremony (Yet? Imagine a French terrorist mime among the Beverly Hillbillies…) - even though I’m very happy with the, er, fallout.

So, here’s a bit of would-be Oscar speech:

Thanks to all of you for the compliments - and for spreading my clowneries around, as the only currency I’m being paid with is feedback (that usually comes straight from the Linkage Bank).

Thanks to those of you who didn’t give up on me during the past year’s long hiatus - while I was busy following misleading and treacherous career trails. I won’t start naming names, you know who you are.

Of course, I suspect there is a slight contradiction in terms between a “mime” and an Oscar “speech”, but what the hell.

People seem to like him, and as a good Capitalist, I always cater for the demand…

The news reporters become the news makers.  Again.  If only everyone would see the gullibility of the leftist press they might, perhaps become more discerning and critical of the reports they believe.  It’s very much like the junk from Lebanon last year and all the “fake but true” reporting.

Thank you again for making the obvious blaringly obvious, for ridiculing the ridiculous.

Please do not assume that you lack of undressing has left your movie bereft of sexual appeal.  Dressed like a terrorist or not, I find myself having no trouble relating with my instructor in a positive way.  Pointy aplenty indeed.  Frogman you are somethin’ else.

OK, Yes I laughed all the way through it, althogh one wonders if it might still be somewhat beyond the ability of AFP to follow; since obviously they were hiding under the table once they was the boomstick!

All that prosletizing I did during your sabbatical was totally worth it! And people thought I was sending them to a dead link. Putzs.

Well now, dear Sarah, you’ve got me all blushy under the balaclava.