The "evidences" of warming keep falling one after the other, so much so that the "consensus", touted by Al Gore and the Global Warming Church of the End Is Nigh (Really Soon Now) has fully revealed itself as a political rather than scientific one.

On science's side, the facts stubbornly refuse to add up even though they pile up (no surprise, considering the amount of taxpayer money wasted on this climatic chimera worldwide), and nearly every day brings the news of defections among the ranks of the "scientific" community:

Until his Damascus moment, Miklos Zagoni, a physicist and environmental researcher, had been touted as his nation's "most outspoken supporter of the Kyoto Protocol." But then this activist saw the work of a fellow Hungarian scientist. His world was rocked.

Ferenc Miskolczi, an atmospheric physicist at NASA's Langley Research Center with three decades of experience, had found that researchers have been repeating a mistake when calculating the impact of greenhouse gas emissions on temperatures. (...) As has been noted elsewhere, Miskolczi's theory could explain why the warming that models have been predicting for decades has never materialized.

No "denial" and a total consensus on the political front however. From Al Gore to Nicolas Sarkozy via Tony Blair (who is quickly blowing off, Katrina-style, whatever respect I had left for him after his righteous stance on Iraq), the worst and the vilest power-hungry politicos (mostly) of the Western world are seizing the Climate Change non-issue as their dream opportunity to tighten their hold on the people, and move forward their global government agenda.

Still, I suspect they will soon run into a bit of trouble, and I also suspect they know it, which is why they're acting as if the scientific question was settled once and for all. They need to move to the next phase (regulating, taxing, cashing in while the rest of us grows poorer and ends up at the mercy of their promises of scarce and targeted "redistribution" of the resources they took from us in the first place - in short, what any respectable politician does best), for if they were to rely on the people's acknowledgement of the threat and approval of the harsh Measures That Must Be Taken To Save The World, they face the unsolvable great dilemma that comes with the Global Warming Prophecy1:

Either you try to keep it reasonably "real" and announce the End Of The World in a few centuries — in which case most people won't care much about it, or at least not enough to have the humility to live whatever remains of their existence (and their children's) in misery for the sake of whatever upcoming generations of asswipes who might not even have the decency to be grateful (you know how these unborn people are) — or you try to boost your register on the Scare Scale by promising a steady rise of temperatures and water levels culminating in The Ultimate Drought and The Final Flood at this very date next year, 10:34 AM sharp.

Then of course, people will expect at the very least a lovely springtime — looking exactly like a Summer vacation in the Bahamas, even for those of us who live in Aberdeen. I mean a sign, anything, that will make Global Warming visible and self-evident in their daily lives, otherwise they will simply dismiss the whole thing as horse manure2. That is, incidentally, the reason #1 why Al Gore keeps going about the Arctic ice melting in Summer, while conveniently not mentioning the Antarctic growing colder.

Thus, having blown both cold and hot air in less than a lifetime (they played the global-cooling-new-ice-age-a coming swan song in the mid-70s3) the Environmental Brown Bermudas4 have hardly any credibility left.

Seeing that science fails them5, and save from the full blown authoritarian method (say, a coup à la Sarkozy: "say 'No' to the European Constitution, and I'll shove my Lisbon Treaty up your wazoo without questions"), the only option left for the Green (and greenish) Left — if they ever care(d) to convince — is plain mystical faith.

Not, mind you, the kind of faith that lights Mankind's road from primal mud to a superior ideal (usually represented as "God") through moral betterment and individual achievements, equipped with such tools as abstract thinking, scientific query and the conscience of one's own freewill in every matter along the way — the best examples of which being the Christian and Judaic faiths that steadily lead and accompanied the West on an upward path of progress6, a fact this agnostic readily acknowledges. 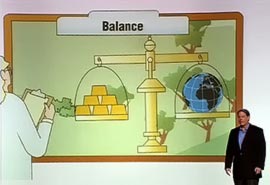 No, we're talking about blind irrational beliefs that confine the individual into primeval fear of the unknown — and the unpredictable — resulting in panicked submission to the nearest witch doctor, who will then further establish his hold on the herd by forbidding scientific query or replacing it with a semi-scientifically sounding mixture of emoting ham actors, dark arts oracles, tacky computer graphics and dowdy PowerPoint presentations.

Behold the Cult of Climate Change.

Now I confess a great deal of confusion at the sight of seemingly smart people (indeed, that excludes politicians and "activists": I'm talking about mainstream, normal folk here) falling for the Global Climate Warming Change scam. While many people kept their cool7 so far, a great deal watched the traveling medicine show, trusted the quacks and bought the snake oil, no question asked.

Predictably, they won't even look into the issue by themselves but aggregated with the herd of believers, simply adding their voice to the psalmodial chant of "Oh my Gore, is it getting hot down here!"

I suppose some of these people could be saved before the cultists start passing the Kool Aid around.

Plus, I'm Cynic the Sarcastic, not some silly self-proclaimed Savior.

So I wrote a song instead, and aptly titled it "Al is All". It's more of an hymn really, in order to keep people blinded, entertained and more importantly inspired while the Gore, Sarkozy and Blair of this world lead the Church of Global Warming to its ultimate destination.


Note: the "play" button may require two clicks to start, depending on your web browser.

Sung by French crooner Raoul "Monsieur Le Cool" Montalanber, who might even have been famous in some circles sometime ago8, even though he doesn't have a website. If the thing stirs enough interest, we may offer the MP3 free — just ask, okay?

The music video is on its way. Hey, anything for the Planet.

I was able to catch some of The Goracle's Global Warming in Ohio two weeks ago. Yes, that would be 15 inches of snow in one day. Nothing like a Level 3 Snow Emergency in March to bring home the "reality" of Global Warming. Thank goodness the Goracle explained away this weather reality with his PowerPoint presentation.

All hail Al. The Savior of earth. Here to reveal the inner secrets of man made global warming, no, make that climate change. Look on his works ye mighty and dispair.

I'm also looking forward to the music video, wonder if you can get the Obama Girl to lip sync in it?

The Algorecle. High Profiteer of Doom.

Gosh... they said it like it would have been a bad thing.

Catchy little tune about Al-lah Gore. Almost hypnotic. In a trance I saw polar bears falling off ice floes into the water by the dozens. "Save a seal. Drown a polar bear."

Oh, how I wish the Al-wise Al-knowing Gore had been with me these past 5 months and two weeks. I could have used the big windbag's hot air to clear the drive-way of snow and ice. Every freakin' week it was one or the other, or both. He could have opened his big yap and had it melted off in minutes.

Great tune. Love the music and the whistlin'.

No, I wasn't in Texas. SNOW? In North Central Texas?! We got to Colorado for snow.

Can AL Gore explain why it's not okay for the ice to melt in summertime? What, he don't like polar bears which don't mind a break from 8 months of howling winds? He got something against palm trees and pina coladas?