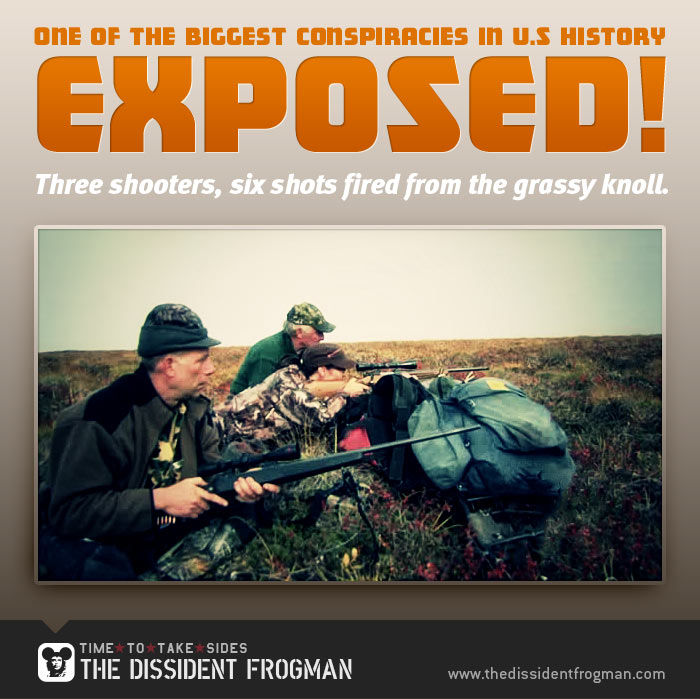 The accute and instantaneous political commentary on the Tucson tragedy by the brightest minds of the American Left1 and the lowest depths of the French printed media sheds an unexpected light on the shooting of another elected Democrat under, as they'd say at Reuters, "controversial circumstances".

Forget about the lone gunman at the window of the book depository with a lame Carcano. The exclusive photographic evidence above clearly shows three shooters on the grassy knoll—as it's been suspected for a long time—with at least two rifles: Sarah Palin, Sarah Palin's Dad and a third, so far unidentified figure, presumably the elusive Black Dog Man—without a doubt a highly qualified CIA secret black-ops operative, considering that he's holding what looks like a very threatening sort of black full automatic machine gun rifle that's certainly not available to a civilian loser like Lee Harvey Oswald.

And now, I'll let Moulitsas1, Krugman1 or Sullivan1 explain how Bristol Palin was actually performing an early rehearsal of "Dancing with the stars" on stage at Ford's Theater, thus luring Abraham Lincoln to his fateful end.

For a second there I expected him to claim witnesses saw Sarah Palin on the grassy knoll.

Ha! Wikileaks, eat your heart out!

Nice to see you back Frogman - and still sticking your thumb in the eye of the left!

I look forward to sharing this with my friends.

Love it when the Dissident Frogman pops in for a little reprieve from all the harsh-political-rhetoric chicanery.

your insight always amazes me

Monsieur Frogman: I missed this missive earlier. I also miss your voice in the fight for freedom and sanity.Hope all is well with you and yours and you can put pen to paper (or electrons to phosphors) more frequently.

A little frogmanly gloating in these days would be welcome.