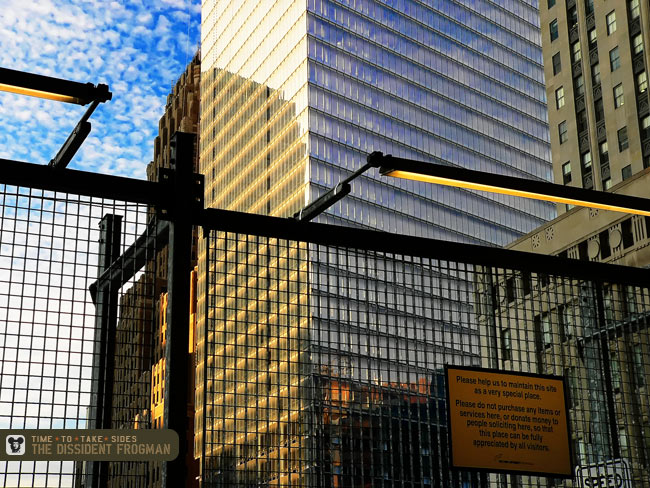 I find hard to believe that it has been 10 years already, but here we are. Nearly 3,000 victims, as young as two and as old as 82, murdered in a most brutal manner by 19 Muslims hooked on the fanatical and homicidal teachings of their political-religious ideology.

A decade since their future was robbed by men who renounced all pretenses to humanity by planning, helping and perpetrating the attacks.

Reflecting on these past 10 years, the one thing that strikes me most is how the attacks have indeed become the “defining event of our time”, as pundits and press repeatedly put it—sometimes even without really caring much about the actual meaning of that powerful sentence.

10 years on and there is no doubt for me: September 11 has been so far a Great Revealer of the spirit of both nations and individuals.

In the West, Europe and the largest part of Europeans either could not care less or actually rejoiced when the planes crashed and the towers fell:

[...] the composer Karlheinz Stockhausen [...] called the attacks “the greatest work of art ever created.”

A far-right journalist who fantasizes he is of the left because he opposes the “plutocracy” [...] was crossing the boulevard Saint-Germain: “150,000 Americans less! What excellent news!”

Meanwhile, in the Parisian suburbs, the flags of various Northern African countries were flying high, while people danced in the streets singing “A bas, à bas, Babylone!” (“Down with Babylon”)—spontaneous expressions of insane joy, only matched by the bile served by the French press at large in the weeks that followed.

10 years on, and if things have changed in Europe, it is only for the worse. What Septembers 11 reveals is that on that day, 10 years ago, Europe chose—definitely—the path to suicide, a path on which she was already too far advanced anyway, even if most Europeans don’t even realize it or won’t admit it.

America and the majority of Americans did not. No matter how grim the global situation may look at this very moment, it pays to take a step back from the current woes of the US economy and look at the bigger picture, through the lens of the Great Revealer, that “defining event of our time”. Why? Because culture always trump economy.

The enduring spirit of the USA, the efforts and sacrifices Americans have been willing to make, the unrelenting hunt for any aspiring or confirmed Jihadist who might have harbored the notion that “al-Ameriki” were soft targets and a quick way to Islamic paradise—only to discover that after September 11 the first part of that assumption was now fatally incorrect—reveals without a doubt where the real future of Western Civilization lives and will thrive.

No, not in Europe anymore.

Surely, mistakes were made. The election of President Zero for instance is a good example—yet simply a typical case of battle fatigue on the count of the American voter, of which he has began to recover and react already.

Americans have a way of fixing errors (theirs and frequently those of others, even when it isn’t their immediate best interest) that is far beyond the grasp of the average European (wallowing as we are in whatever the new and trendy nihilist ideology of the day) and that ensures their nation’s resilience, no matter what happens.

10 years after, the lesson of September 11, 2001 is that while Europe doubled-down on the path to societal suicide, America took the high road to survival.

I expect that despite a few bumps on the road, she can only gather speed now.

There is much comfort to be taken in that, and I simply cannot think of a better way to remember and honor the victims of that terrible day.

Thank you for your comments. It's always a treat to hear from the frogman

Just stopping by to let you know that, as the world goes to Hell, I do, indeed, think of the dissident frogman from time to time. I have never let go of 9/11. My brother, an assimilated Texan and a Vietnam vet, gave me a lapel pin shortly after that was an American flag with a red white and blue memorial ribbon around it that says 9-11-2001 on the bottom. I am still wearing that pin. In my Orthodox Jewish world, people do not wear American flag pins with what looks like a candy cane around it. I get peculiar looks in some of the Orthodox enclaves where I visit or pray. I have often thought that maybe it's time to take the pin off —œ I have also been flying the American flag on the flagpole outside of my house and, I sometimes think that it's time to take that down tooÃ¢â‚¬Â¦ But, I don't. When the rare person stares at my lapel pin with a questioning look in their eyes, I try and explain - There is a Great Evil in this world that is seeking to destroy us all. It is present and ongoing. Bin Laden was simply the Evil that attacked us on 911. This exact same Evil is present in what is today called the "Arab Spring" —œ which is just a continuation of a murderous 100 year Great Sectarian Civil War in the Muslim and Arab worlds. This Evil worships Death and wishes to destroy all those (particularly other Arabs and Muslims) who do not worship Death in the same manner. This Evil wishes to obliterate Israel. This Evil wishes to destroy the United States. This Evil is erasing Europe. If we do not remember this Evil and fight against it, it will, indeed, "destroy" our world. So, I wear my lapel pin and I hope that I remember to remember.

Nice to hear from you again, DF, it's been too long.

As far as 9/11 goes, I would go as far as to say this, the Left wants America to fail. French Lefties, American Lefties, German Lefties, etc, etc. They revel in the pain that those 19 asshats caused, they celebrated the towers going down (some in private moments), and they have they perfect person in the Oval Office.

These people want a Marxist Utopian Shithole where the United States used to be. But they are not quite there yet.

Good to hear from you DF. Keep safe!

Welcome back my favorite frogman.

Hey... DFM (or one of your handlers)... I just updated my profile and left a lengthy note in there for YOU.

Whether or not you hear what I'm saying, I'm telling you there are a lot of us that come here because you've pretty much had scoop that was GTG.

You've been absent a long time now. If it is out of your control,m well...Oohrah, shit happens.

But like I said in my note, we're coming to a crossroads in the US and for that matter, the GD globe.

We ALL need to engage now. Too much is riding on this next year.

BTW... the piece you did on Palin several months back... priceless, friend. Well met.

Come on, you friggin' Frog. Start bringing it.... again.

Our beloved Frogman is back! Your missives are always among the best, friend. Too long absent, though. I hope and pray you are well and your absence is just life intruding. Please stay with us!

Dear frogman, I miss you! Cher frogman, vous me manquez!

Thanks for your tribute.Wish you posted more.
Add a comment