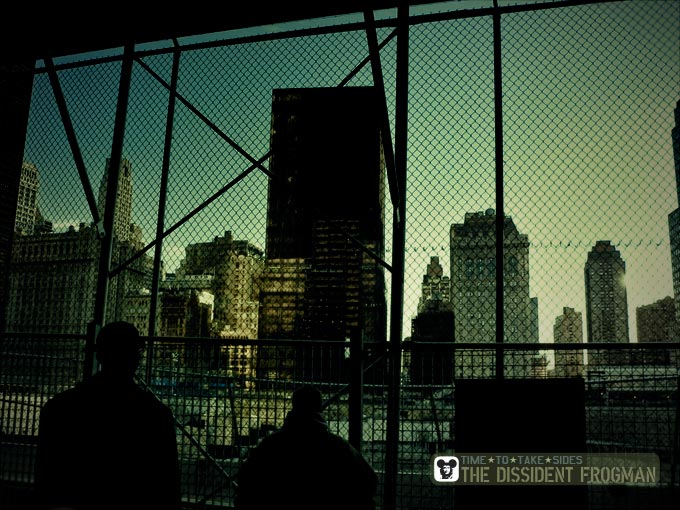 On this day, eight years ago, 19 devout Muslims brutally and cowardly murdered 2,974 men and women in the name of Allah "the benevolent" — and since then, many more all over the world have perished, victim of the same totalitarian ideology that is Islam.

For many of us, including me, this was a day of horror, anger and more importantly awakening. It was a day of renewed acknowledgment of that centuries-old and relentless enemy that ever since its first appearance in Arabia has expanded through sword, fire and bloody murder all over the globe and all along the ages, from India to Europe and from Asia to Africa. While the best among us have been battling them from the fields of Poitiers to the streets of Fallujah — with outstanding resolve and results — I am now more concerned about the dangers on the home fronts, whether of open attacks such as those of September 11, 2001 or of the more insidious, stealthy and growing parasitic encroachment and subversion of our open societies' values under the guise of Islam's "peaceful settlers" by those whose only goal is to enslave or destroy us.

Thanks to our brain's natural defense mechanisms, the horror of that September day gradually faded, feeding, hopefully, a more acute sense of alertness. The anger, however, is still here; when it comes to the hideous, oppressive political-religious system the Muhammadans aim to impose on the rest of the world, that anger woke us up — and ensures we won't fall asleep again.

It bears repeating that the meaning of the word "Islam" is "submission".

It also bears repeating that we will have none of it.

They'll find one dwarf in the midwest who still draws breath.

I own a Pit Bull, or rather, you should say, a Pit Bull came into my life by chance. We found her, in pretty sad shape, chained to a fence post on a lonely country road on chilly day in March three years ago. Who knows what her story was, but she had scars all over her body and face, and had obviously been there for a while. Pits have a bad reputation; people questioned my sanity bringing her home (we have small toddlers and other dogs -- surely such a dog wasn't safe; I got a lot of "don't you know what those dogs are like?"). Oh, and quite a few people made disparaging remarks about her looks -- strikingly beautiful is not one of her traits; she's rather ordinary, an "everydog" as it were, but after a while she starts to look rather good, once you get to know her. Just like you begin to appreciate her character, once you give her a chance and get to know her.

Pits used to be the quintessential, jack of all trades, can-do American dogs at one time. Iconic even.

She obviously worked out, because she's still here -- grinning a big, goofy grin, thumping her tail, and bothering the snot out of me (she wants to go out and play, can't understand why I'm just sitting here at this computer when there are obviously better things to do). She is, like her breed's history has been famous for before the bastardization of it and the ugly stereotypes, a wonderfully sweet, forgiving, and loyal dog (she has been a trustworthy companion and good friend to everyone, human and animal, in this house and to just about everyone else who happens by as well -- a remarkably happy go lucky dog who doesn't seem to hold a grudge with anyone, but I wouldn't attack her family or her house as she's very protective of all that she considers her job to protect; she on the other hand would obviously put up with a ton of abuse to herself). Whatever awful things happened to her in her past, no matter the harshness that obviously was her existence prior to that day in March, nothing broke her spirit, changed her intrinsic good nature, or most importantly caused her to quit. She's a survivor (and a winner) of the highest order I think.

I think about her, laying at my feet now, and of her breed and how a lot of people positively hate her just for what she is without getting to know her, and how that still doesn't affect her in the slightest, still a goofy, happy dog(you would think with the way she acts sometimes that she was an incredibly stupid dog with her clownishness and unconcerned demeanor; that would be a big mistake); still up for anything; still retaining a persistent belief that life is a good thing...in spite of everything she's obviously gone through.

I think there's a lesson to be learned (maybe more than one) from a dog like that.

...and now I'm going to go put the kids in the stroller, snap on silly girl's leash, and go for a walk...and thank the good Lord who made me that I was put on this world in a position to be able to do just that, and wish that others could be free to have the same sort of joy in their lives now, and for a long, long time after my dog and I are gone. Take care folks; we will overcome.

"It also bears repeating that we will have none of it. "

You are a lot closer to the belly of the beast there, Monsieur Frogman. You have stood with us. We will stand with you.

In a few hours this family will join other like minded Americans and rally in Ft. Worth. We will gather, in part, to remember those killed by cowardly evil 8 years ago. We will also gather to battle against a government intent on growing and sustaining only itself, defying the laws and precepts of our founding documents. We say "Never forget." and then let our government continue to trample on our rights? How does that honor the fallen? The brave ones of Flight 93? Be silent no longer. Stand with your neighbors and friends. Do not be held fast by grief, be galvanized by your anger and put it to productive ends.

Call, write, march. No rest, no slacking off.

The current administration referred to yesterday as "a day of service". Service? To whom? Not a day of mourning or rembrance, as if we are all supposed to have "gotten past it".

Well, I haven't. And I never will.

In the 8 years since that terrible day, there have been an additional 14,035 deadly terror attacks carried out in the name of Allah: www.thereligionofpeace.com/

I will stand with each and every one of you when the time comes.

Lady Cincinnatus, the Frogman is right, you nailed it.

Not a day of mourning or rembrance, as if we are all supposed to have "gotten past it".

Well, I haven't. And I never will.